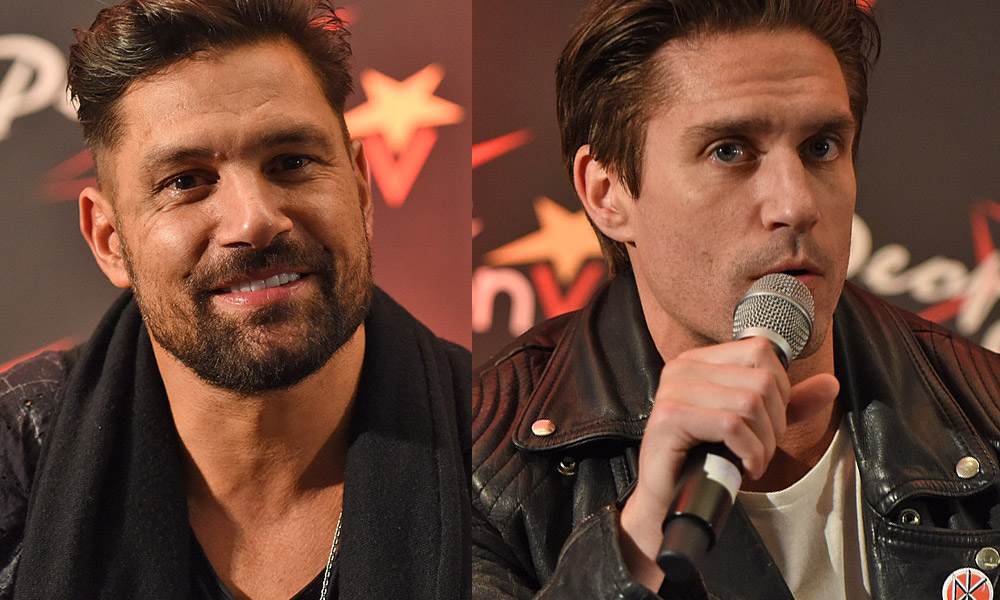 People Convention organized in June 2017, the 3rd edition of the Super Heroes Con, convention about the TV shows Arrow, The Flash and Legends of Tomorrow. On this occasion, many actors were in Paris, including Manu Bennett (Deathstroke – Arrow) and Michael Rowe (Deadshot – Arrow, The Flash), which we had the opportunity to interview. Both of them two regulars in conventions – even if Michael corrects us by saying that he only went “to twelve” – ​​we were able to discuss their feelings about these events.

Whether in the US or Europe, Manu Bennett and Michael Rowe travel the world to meet their fans. If Michael did not know the existence of conventions before his role in Arrow, Manu Bennett was aware of these events thanks to his actor friend Temuera Morrison (Jango Fett in Star Wars). Maori, just like Manu, he advised him to go to these events: “so I set forth on my carrier and discover exactly what he told me about.” A world where contact with the other is put forward: “it’s very social and the world is becoming less social specially in North America. People are doing everything online and people are more closed off but at these events there are really fun parties, it can get crazy. It’s like a rock show with this sort of rock star king of vibe.” Same sound coming from Manu Bennett who goes to conventions for a single reason, people: “If you’re not connected you might as well go sit in an ivory tower and that’s not my place in this world, not my place as an artist. As an artist, I’m here to affect people. He continues: luckily I got the chance to play characters that have gone global and some of them have really good values. Rather than just playing the polished hero, I play the person that’s next to him, the person who got flaws and I think that’s more realistic characters to most people. I enjoy that artistic responsability. Most of my challenges with these characters who have quite rollercoster rides, who can be tormented by life, or be challenged by life are to make them grow to who they’ve becomed. In term of relevance, people who know my story know that’s my life too. So, that I can share that as an artist, to affect people through the screen, that’s a sort of position of influence that I don’t take lightly. I just try to approach it with the truth.”

Coming from the world of music, Michael Rowe makes a parallel with his musical carrier and recognizes himself in this community even though he confesses that he did not understand everything: “when I first went to one, the community of it really spoke to me because I come from a musical background and I play punk-rock music and it’s like these people are sort of fringe, outsiders maybe in their school or something like that and they find each other and they gravitate toward this thing and so this community reminded me of that. But also, when I stopped playing music and started acting, it’s almost like if you’re a musician and you go to studios everyday. But I played music because i like to tour, to do live performances and meet people and see the world and so then, realising that conventions were a thing it’s like « wow i get to go on tour again ». It was a really good fit but also really bizarre to me because i didn’t understand, i didn’t know a thing. In America people dress up as the characters and they really get into that. It’s like they are art form. They are doing a little bit of acting but mostly they are doing costume design. They are more fan of how you design a show rather than how the person choose to play the personnality of the character. It was a unique spin of things. And then you meet people. So you show up and you get to be yourself : “ok, let meet the guy who plays the character as just himself who’s the actor” but then you meet a lot of people who are you as the character, so they’re kind of playing you this weekend while they meet the real version of you. It’s very strange but it’s also very fun.” It is one of the reason why he prefers European conventions to those of North America: “they are smaller over here so you get to know people, to see knew places, to experience new culture… it’s a lot more stimulating. The ones in the US are a little bit more of the same.”

Both, knowing really well conventions – even if Michael Rowe finds that he “has not done so much, and much less than the others. Only about a dozen or so” – judge by yourself – we wanted to know what they preferred during their previous experiences and if they had a special memory or fan that came to them a head. For Manu, it’s impossible to choose: “it’s like walking through the forest and trying to pick out one particular tree.” He adds, “There is a possibility that what we do can affect people and I know that because I travel the world and I meet fans and I go to these conventions for that reason. So many people woke up to me, soldiers wake up to me that have come back from fighting in Afganisthan and said to me : “when I was stuck with my comrades we would watch Spartacus” because they relate to the brotherhood, the loss, the suffering of being in a unit facing death on a daily base. And sometimes, I feel kind of humiliated when I’m talking to them because i’m an actor and they’re really there and I think of it. But at the same time, when I was 16 years old my brother died in my hands so I know loss, I know the feeling. So, when I’m dealing with my character as an artist I go to the place of loss, I go to the place where I know that feeling and when you’re sending something through a small square box that is sitting in a platoon tent in Afganistan you don’t realise until you meet that person that what you did actually had meaning. As an artist, that’s all I try to accomplish throught my performances. It’s really trying to make an emotional truth so people will feel the emotional journey of the character. “

As for Michael Rowe, it allows him to get closer to the other actors and he likes it very much: “because you’re a cast member you think everybody knows everybody but you don’t always share scenes with the other actors so I only get to know the other people on my show through doing these conventions. You get to make stronger bonds with the actors you’re not at work anymore. I know it is still work, but you’re yourself, you’ve got a lot of day time, you go out to dinner, you can go out to a party… So, the best thing for me, is making really good friends with people that you know of but don’t get to know through your work and there are so many in Arrow, The flash or Legends of tomorrow. There are so many people that I’ve seen their work but never got the chance to tell them that I liked what they are doing or get to know them or stuff like that…. Conventions allow that.”

After exchanging with Manu Bennett and Michael Rowe, we have confirmation that conventions are just as important for them as for the fans. So if you also want to share moments that will remain engraved in the memory of the actors (and in yours), we will meet you at a future convention!

Space Walkers 5: Bob Morley and Jarod Joseph are the first guests of the The 100 Convention

The Boys - Amazon Prime VideoWhile Jared Padalecki will remain on the…

Conventions TV Show
The 100: Lola Flanery will visit Paris in 2021 for the Space Walkers 6