Rivercon : a look back on the Riverdale convention

For the first convention in the world about the Riverdale series, 8 actors had responded positively to the invitation of People Convention, the organizer of the event. Fans were able to talk with Cole Sprouse, Lili Reinhart, Casey Cott, Mädchen Amick, Skeet Ulrich, Lochlyn Munro, Marisol Nichols and Vanessa Morgan. Let’s take a look on this successful event! 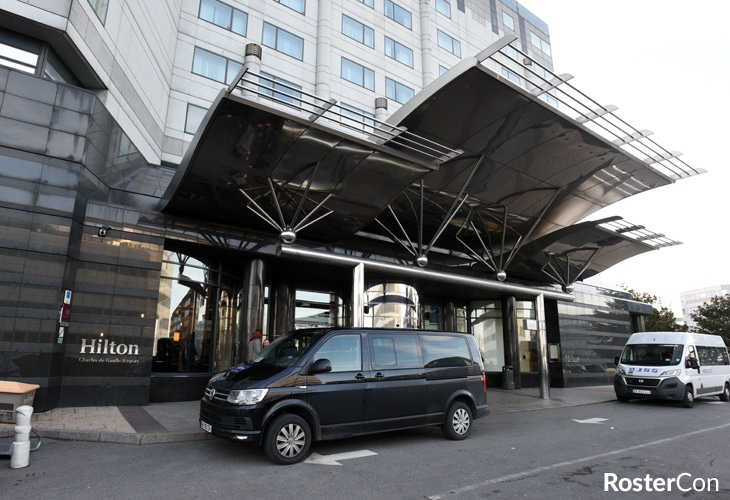 Well accustomed to conventions with People Convention, the Hilton welcomes this time the cast of the Riverdale TV show. The event was scheduled to star at 10am! 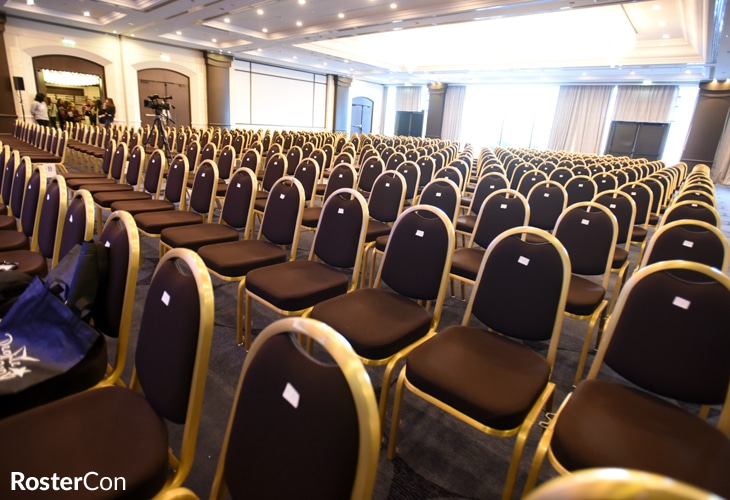 The calm before the storm

And what a beautiful storm! Several hundred fans are going to fill the room where the panels and animations will be held during the weekend. 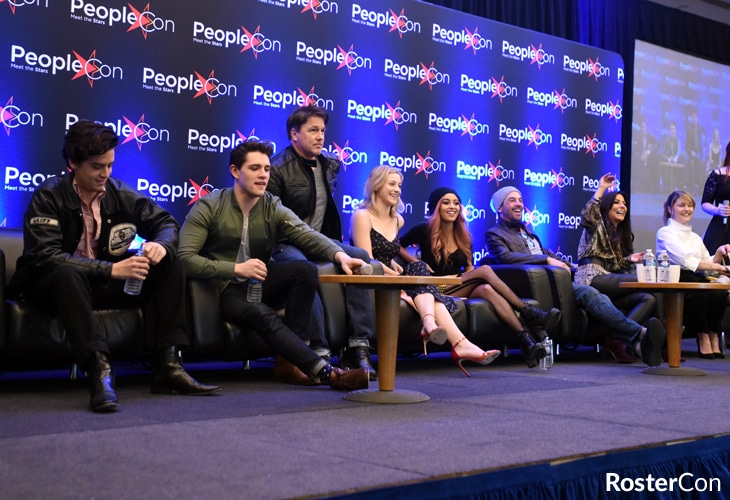 The 8 actors came on stage to greet their fans. Cole, Lili, Skeet, Mädchen, Marisol, Vanessa, Lochlyn and Casey try to speak in French and they were able to see the excitement of the room. 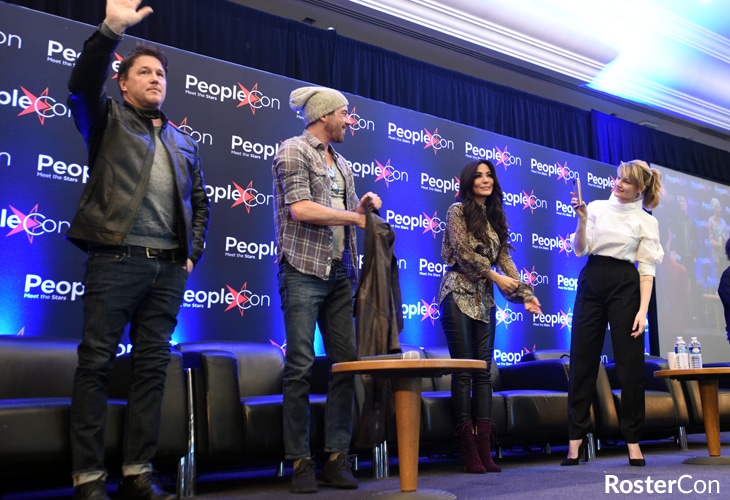 Lochlyn Munro, Skeet Ulrich, Marisol Nichols and Mädchen Amick remain on stage for their panel. We particularly loved the beautiful complicity between Skeet and Mädchen. It's clear that the "Falice" couple is really not forced on TV and we can't wait to see how their relationship will evolve in the series!
> Soon, a summary of the panel 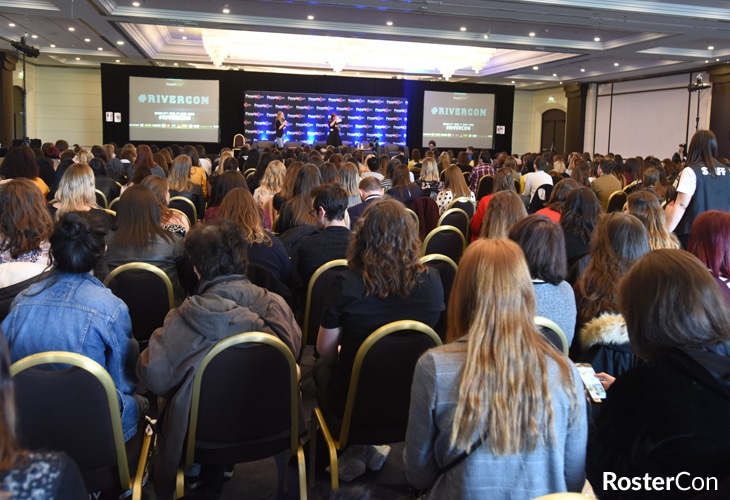 While the actors have just left the stage and the extras are going to start, games are taking place on stage in order to keep busy the remaining fans in the big room. 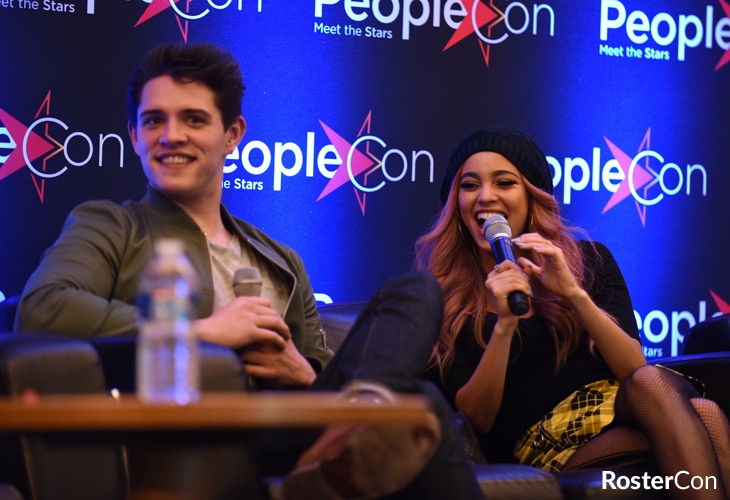 Whether it's Kevin's evolution or the new relationship between Toni and Cheryl, questions and answers have rocketed. And always in a good mood of course.
> Soon, a summary of the panel 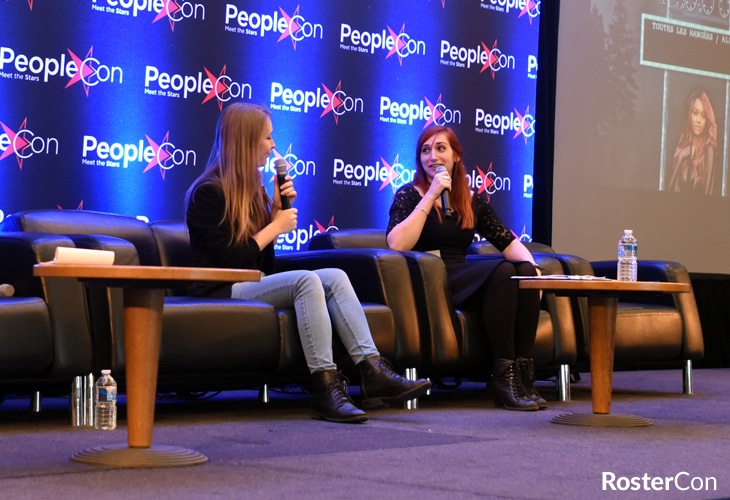 Fanny and Clemy are doing the animation

Always in top shape, the powerful duo of People Convention has once again did a great job by offering many animations throughout the weekend. 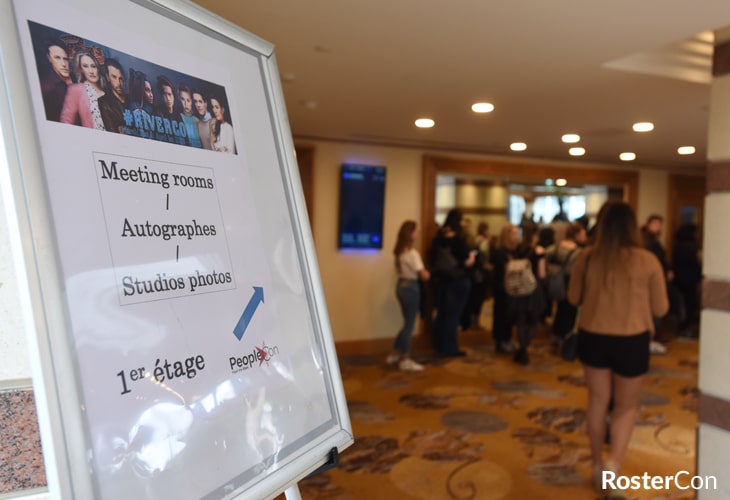 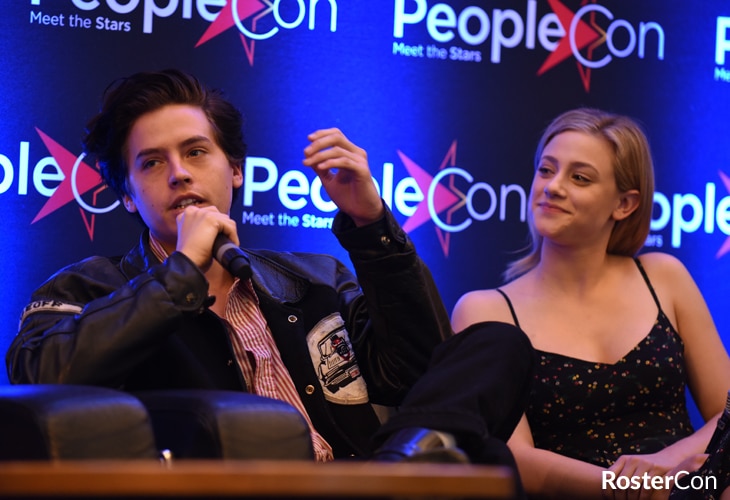 It was probably the most anticipated moment: the panel bringing together one of the most loved couples of the series: Betty and Jughead or Lili Reinhart and Cole Sprouse. Between humor and shyness, it was one of the highlights of Saturday.
> Soon, a sommury of the panel 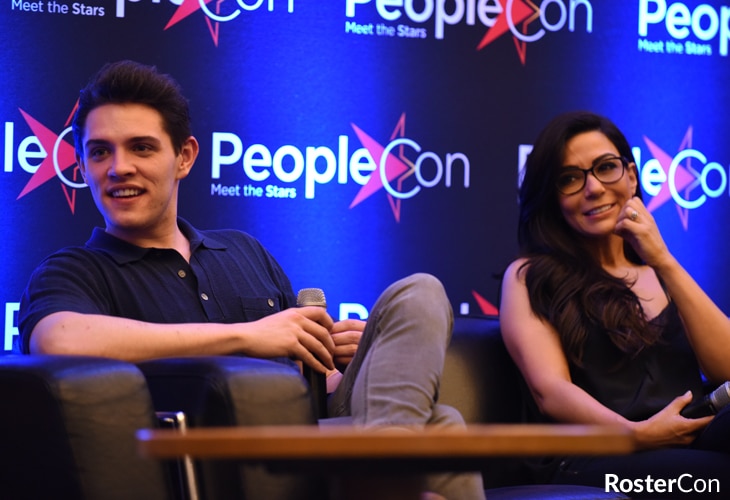 What better way to start on Sunday morning? The panel took place in a very good atmosphere and made us want to see more scene in Riverdale between the two actors. Don't you think ?
> Soon, a summary of the panel 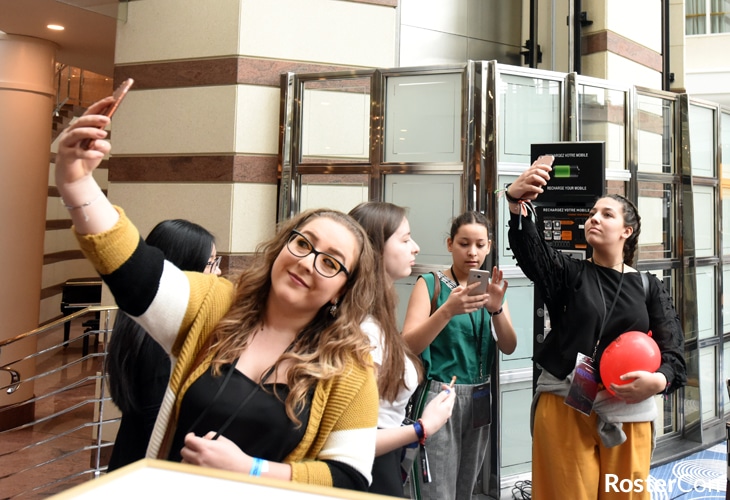 It's THE People Convention specialty: the selfie rally. The goal? The animators give you a clue, you take a selfie with, what you think is the answer and so on. 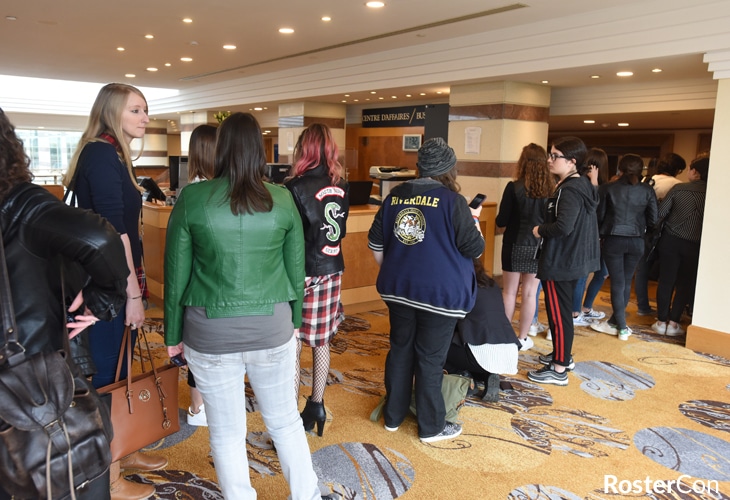 Huury up, it's Cole pictures time !

Fans are patiently waiting their turn for photos. What pose should I do... 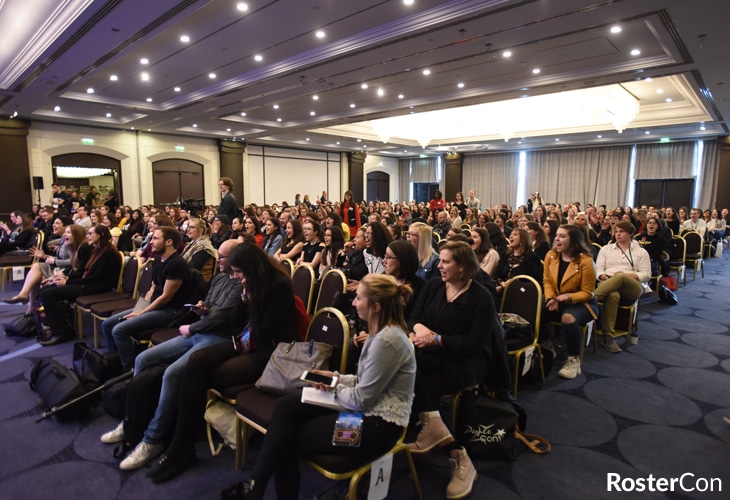 After the lunch break, and before starting panels again, the animators warm the audience. So who's the best? Fanny's side obviously! 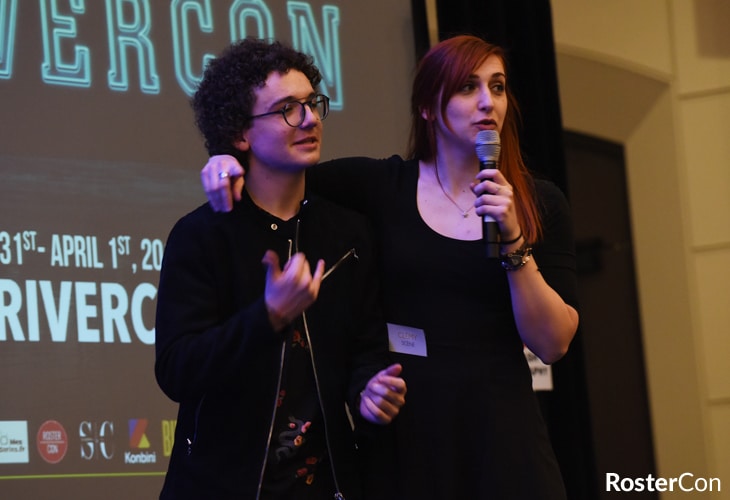 We introduce you Maxence

With Clemy on the picture, Maxence is the sign language interpreter of the organizer. While waiting for the panel, he taught us a few words... that we might have already forgotten. We are bad, very bad... 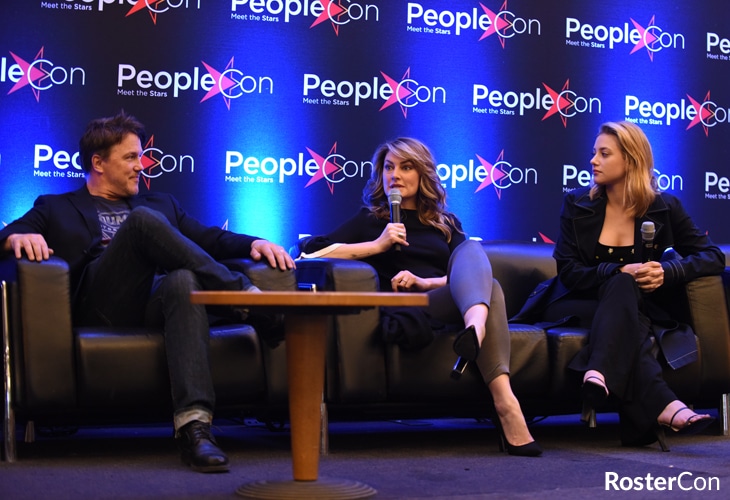 Lochlyn, Mädchen and Lili shared a panel Sunday early afternoon.
> Soon, the summary of the panel 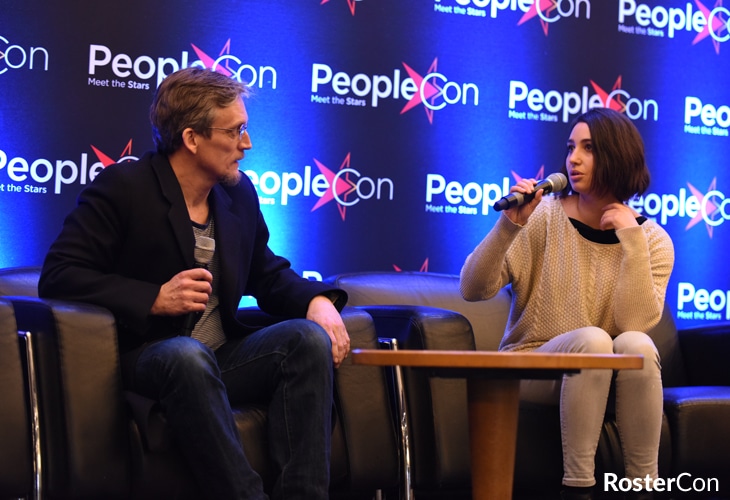 People Convention had the good idea to end the panel by presenting to Lochlyn Munro and Lili Reinhart their French voices: Ludivine Maffren and François Delaive. After the American actors left the stage, a small exchange with the fans took place in the big room. 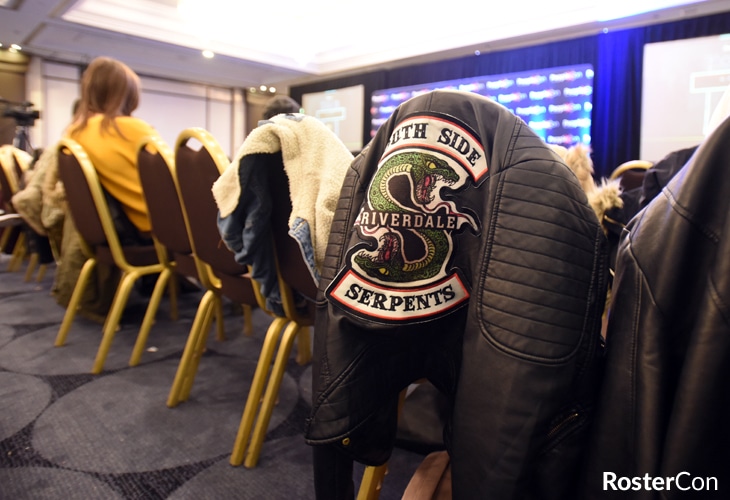 North side or South side ?

With a show of hands in the room, the South Side have won the Battle of Riverdale. But what's going to happen in the TV Show... 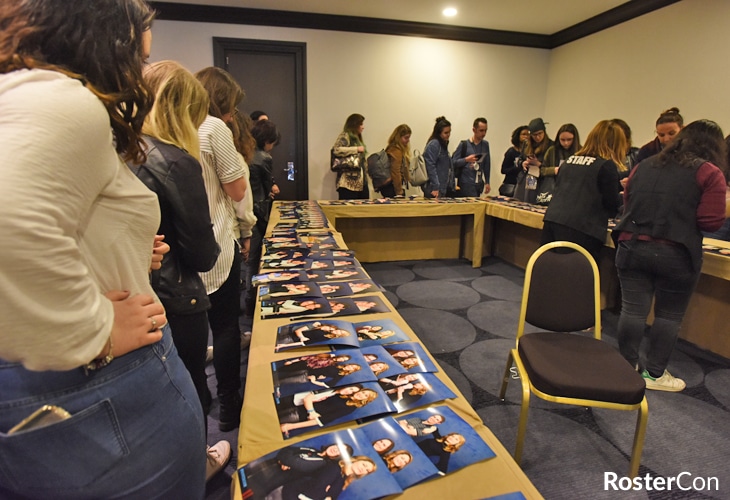 It's time, for fans, to look for their beautiful shots with the actors. 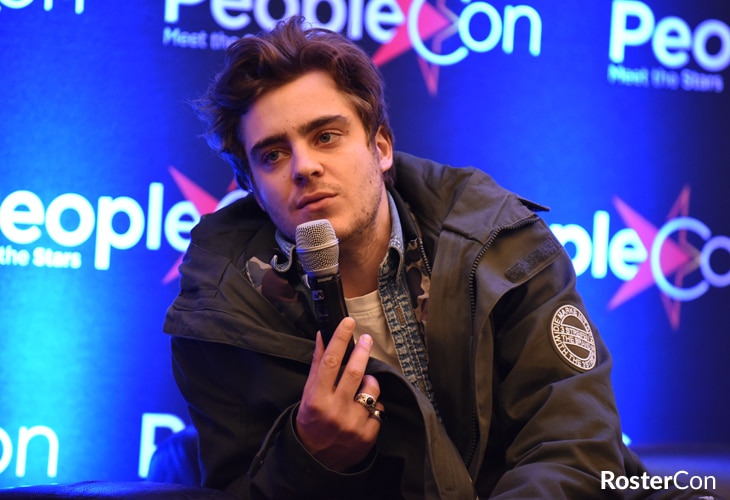 Clément, the French voice of Cole Sprouse was on stage for a few moments to answer questions the fans asked themselves about his profession, about his career. 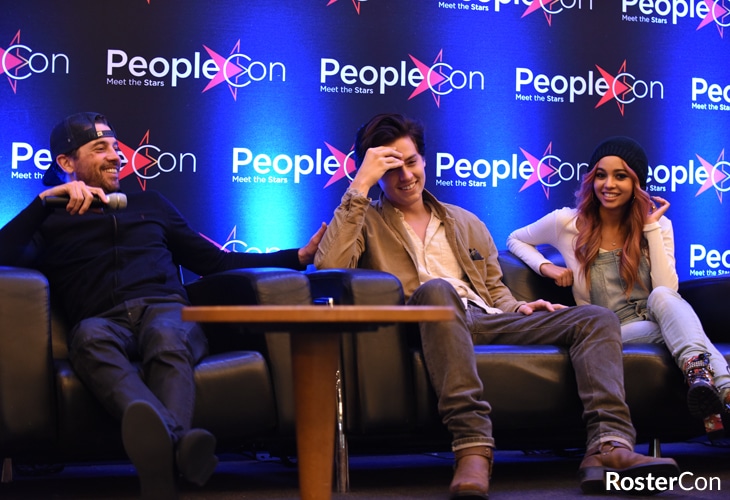 After a special Cooper panel, the last Q&A of the weekend featured Skeet Ulrich, Cole Sprouse and Vanessa Morgan.
> Soon, a summary of the panel 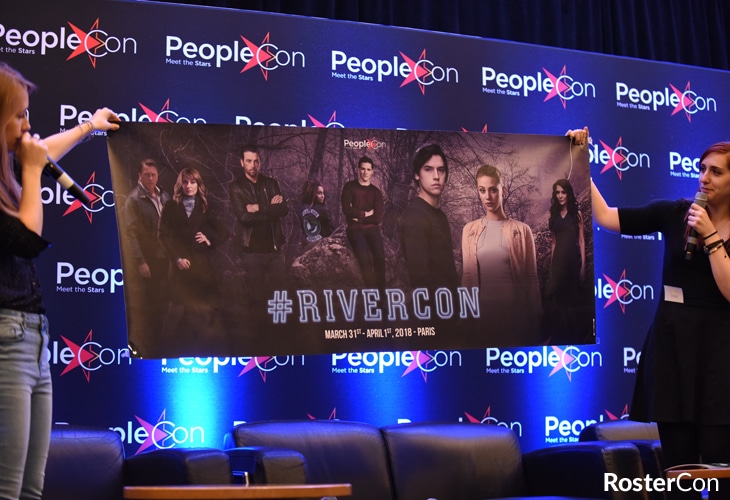 Banner and exclusive photos at auction

People Convention auctioned the banner of the convention as well as 8 exclusive photos taken by one of the photographers of the event. The winners were able to have the objects autographed by the actors. Both lots were sold 230 euros. 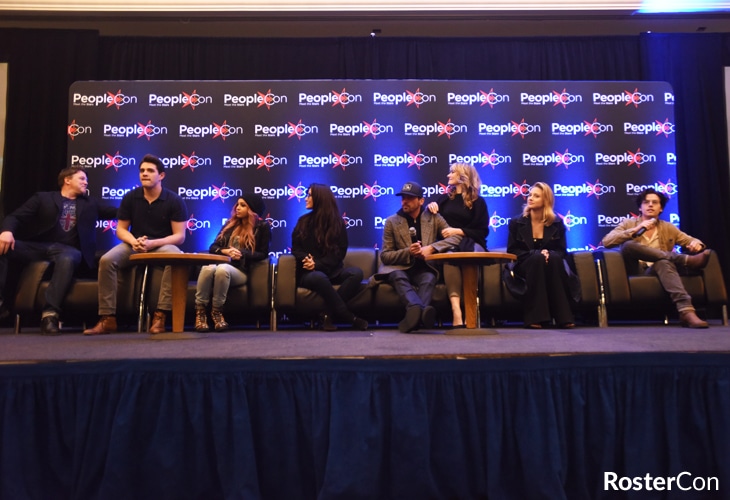 A little surprise awaited the actors during the closing ceremony: the fans sang Mad World in front of them. The guests were very moved by the attention. 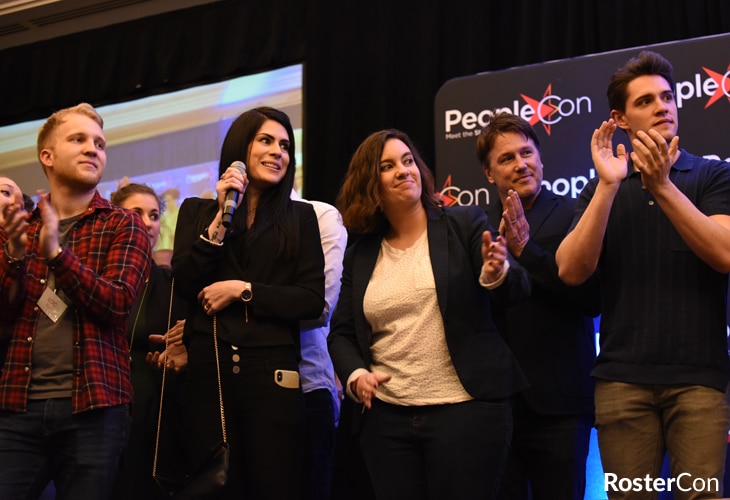 Just before definitively closing the event, the People Convention team joined the actors on stage for a final goodbye. Until next year ? We hope so!

Thank you to the People Convention team for their welcome, good mood and kindness. We will, little by little, publish summaries of the panels. In the meantime, you can already find many pictures of the panels. And stay connected, we could have photos and objects dedicated to make you win …While the actors have just left the stage and the extras are going to start, the animations follow each other to occupy the remaining fans in the big room.

Conventions TV Show
Riverdale : Cole Sprouse will be in Paris for #RIVERCON

Conventions TV Show
Riverdale: where are the tattoos of the Southside Serpents?

TV Show
Why anime is so popular among NBA stars