Rebecca Mader : “During conventions in Brazil, I feel like Justin Bieber” 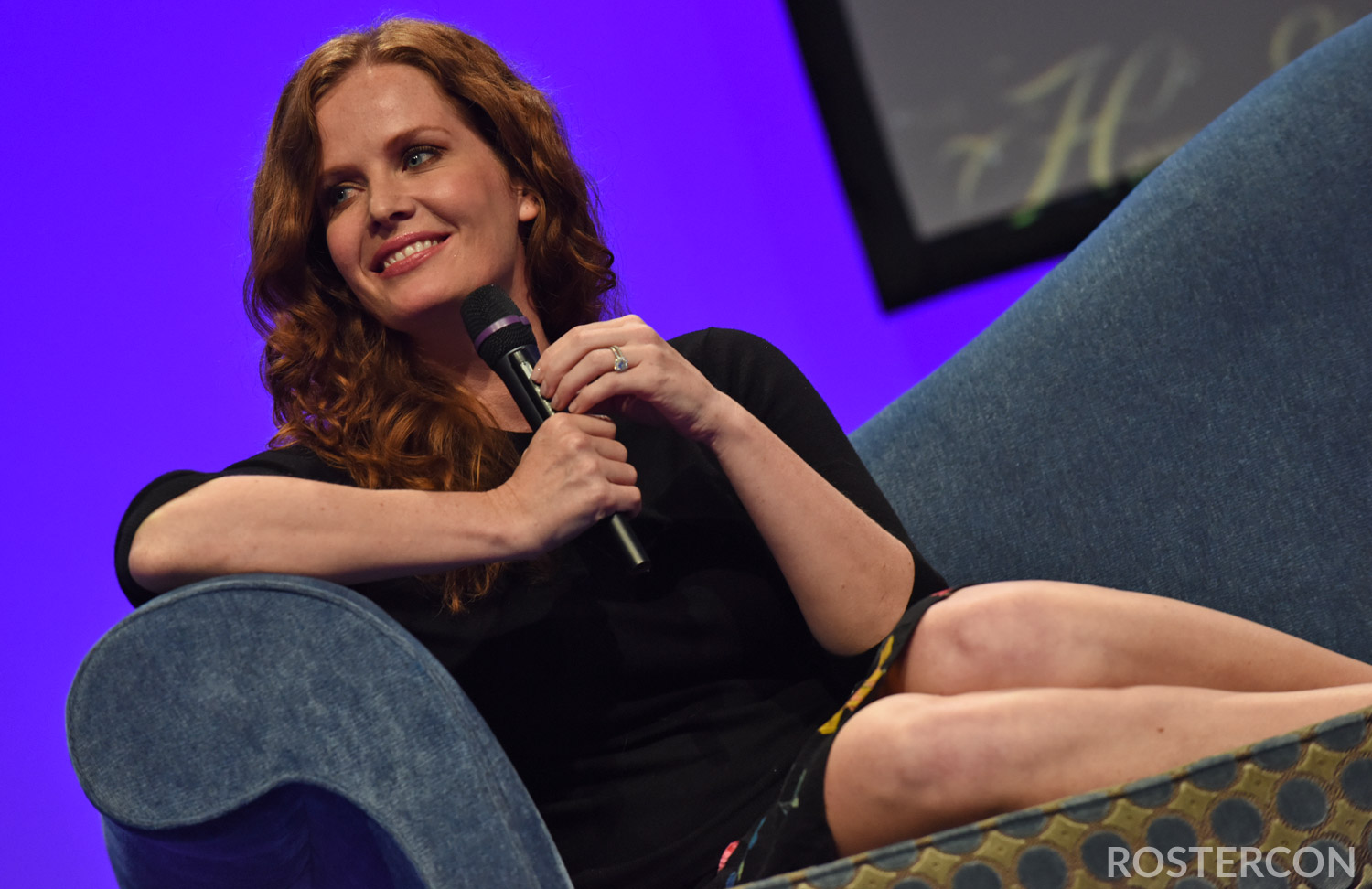 Rebecca Mader, the great actress behind the Wicked Witch in Once Upon A Time was in Paris for The Happy Ending Convention in june. Accustomed to conventions, we wanted to know more about her feelings toward these events. People Convention gave us the opportunity to chat with her.

This is your third convention in France, is there a moment or a fan that stood out ? Maybe a best memory from these 3 conventions?

I think if something stood out it would be when I did my first convention in France. At the end of the day, on the sunday, they asked us to go out individually to say goodbye. I never did a closing ceremony before and i’m like cool, I will just go and say bye to everyone and then go home. I walked out, and someone gave me this big book they made for me and everybody started screaming my name and saying like “Bex je t’aime”. There was so much love and it was the loudest crowd I’ve ever seen in my career. I actually started crying on stage (laugh). It was very overwhelming, it was very sweet.

Why do you chose to go to conventions?

Because I’m invited. People would come to me and say “come to Germany, why don’t you love us”. I’m like “I’m part German, I would love to go but if there’s no promoter for an event… I can’t do it in the back of my car“. We tend to go where we are invited and if it’s an amazing convention, like the ones by People Con, we gonna go. We go together, we know it’s a good strong company and it’s legitimate so we go. I tend to go just where I’m invited.

Are there differences between countries in term of organization or fan behavior for example?

Yes ! How long have you got ? 20 minutes later, Rebecca is still answering the question (laugh). I think different country have different energy. I would say Brazilians are the most loud, the most passionate. When they scream, you’re like waaow. I feel like Justin Bieber in Brazil. It’s really funny, I’ve never met such expressive, passionate people in my life. The french are very loud too, they’re close second. So there are different behavior in term of (she screams) the excitement and it’s really cool, really sweet.

With all the Q&A you’re doing in conventions, what’s the question you are asked the most?

It’s usually about my green makeup, people want to know if it’s makeup or special effects. They want to know how long it takes to get off. People are interested in the process of what it takes for me to become the wicked witch.

What’s the question you hope nobody is going to ask you?

What’s the question you wish you were asked ?

I don’t know… fans asked really amazing questions. I don’t think there is something I haven’t been asked that I wish I was asked. I think I get asked really unique, different questions. Each convention someone will surprise me. You think ‘oh it’s going to be the same question’ and then someone ask something really thoughtful or really clever. My fans make me cry all the time. Last week-end, a couple of girls sang a song for me to thank me for being on Once Upon A Time.

Is there a moment you prefer between autographs, photoshoots, meetings, Q&A…

My favorite part of a convention is the Q&A on stage because it’s just so fun. And all of the sudden it’s the last question and you’re like “why”. The time goes so quickly ! I like to do them by myself, to do them with Sean, with other people. We’re such good friends, it’s just like hanging out, like having a cup of coffee with friends. It just feels like you’re having a good time and the time passes really quickly.

Many actors told us that thanks to conventions they are closer with other actors from the same show or they even met some actors. Is it your case?

Yeah, absolutely ! Doing convention has really changed the show, the dynamic between the actors for sure. It was really Paris that changed it. When we started coming to Paris together and we would go out to dinner, go out for wine and hanging out. When you’re working together, you don’t wanna see each other during the week-ends. You’re like ‘I’m good’. But when you’re forced into these situations you’re like ‘we’re in Paris’, you have to go out for diner. And then, we kind of fell in love with each other and I think that, because of the convention, especially for me, I made really special friendship with other actors from the show.

Conventions are really popular right in France, and it was not the case few years ago. Why do you think it’s the case now?

Because someone use their brain and said “we can make some money, and we can connect the fans.” It’s genius ! And I honestly think that social media’s probably changed it. We can now interact, support our fans and speak to everybody. These conventions are such a wonderful way to bring the fandom together, for these people to come here and connect. These kids make friends online and then they get to come here and meet each other in person. A lot of people come to convention, not just to meet the actors, but also to hang out with each other. I think the Internet is why conventions have become so big, so popular.

Are conventions something you would have like to do for another TV show?

Is there an actor/actress you would love to meet or play with ?

Maggie Smith from Downton Abbey. She reminds me of my grand mother, she is very talented. I really really want to work with her. That would be a dream come true.