Emy Taliana : « Signing Start the Wave in front of Dominique Provost-Chalkley… It was extremely emotional »

Artist and fan of Wynonna Earp, Emy Taliana, became known a few months ago by publishing videos of her, covering songs heard in the TV series. Real hit on social medias, she has successfully mingled her passions to become a must in the Earpers’ family. Recently invited to the Earper Con UK (a London convention dedicated to the TV series Wynonna Earp) to give a concert, Emy has agreed to talk with us about her crazy “Wynonna Earp” adventure and the start of this new friendship with Dominique Provost-Chalkey, the actress playing the sweet Waverly in the show.

Can you tell us how came this interest in the TV series Wynonna Earp?

I don’t watch a lot of TV shows, but when I like one… Some friends told me « Emy, if you liked Buffy, you will absolutely love Wynonna Earp », and, Wynonna Earp got me! I first loved the music, I told myself ok if the show is as good as the music is, I’m in! What I love about this show… the strong female characters of course! Such strong and powerful women, fighting with their struggles; and it shows that being vulnerable is not a weakness, it’s ok to be f*cked up, it doesn’t mean you’re a bad human being. So many different type of women, complex characters… we need to see more of that on TV I think.

Few months ago, you started a musical challenge on social medias by posting videos of you, covering songs heard in the show. How did you get the idea ?

It wasn’t deliberate at all. I saw on twitter that the show was struggling to be back on set, I immediately saw the hashtag ‘#FightforWynonna’ and I just wanted to tweet something to support them, and I wanted to do it « my » way, with music. I post a cover of « Wildwood » the song that we can hear during Nicole (Katherine Barrell) and Waverly’s (Dominique Provost-Chalkley) first kiss. Emily Andras, the show runner, retweeted it and the magic happened.

2 days later, I decided to share a « Tell that devil » cover and Tim Rozon (who plays Doc Holliday) retweeted it, and the magic happened, again. My phone was going crazy! The fans sent me so much kindness, I was so inspired by them. This show changed my life forever, I wanted to give something back and contribute to its return.

When did you feel it was growing?

Almost immediately, I wanted to do one song a day, maybe for 10 days… (Emy was on tour at the same time, ed.) and now I’m at day 76 (laugh) what an incredible adventure!

In April, you made your participation in the EarperCon UK official. How did it happen?

So much kindness in their message, they told me that the fans wanted me to come, I was overwhelmed, it was crazy, I’m so grateful.

A few months later, Katherine Barrell and Dominique Provost-Chalkley were in Paris for the Our Stripes Are Beautiful convention. We learned that Dominique went to see you the day before, at the concert you gave in Paris …

Oh my god yes it was incredible. I will never forget it. A few days before the show, I sent her an email saying that I was playing in a little venue in Paris. She didn’t answer but she said, few months later, during a panel at a New Orleans’ event that she has had a very good feeling when she read the message, and she wanted to come.

I was playing, just finishing a song, I turned around and she was like « heeeyyy!! » with a big smile on her face. She sat just in front of me and listened to me all night, smiling, and singing and dancing, she was so happy it was magical. And since then we became friends. 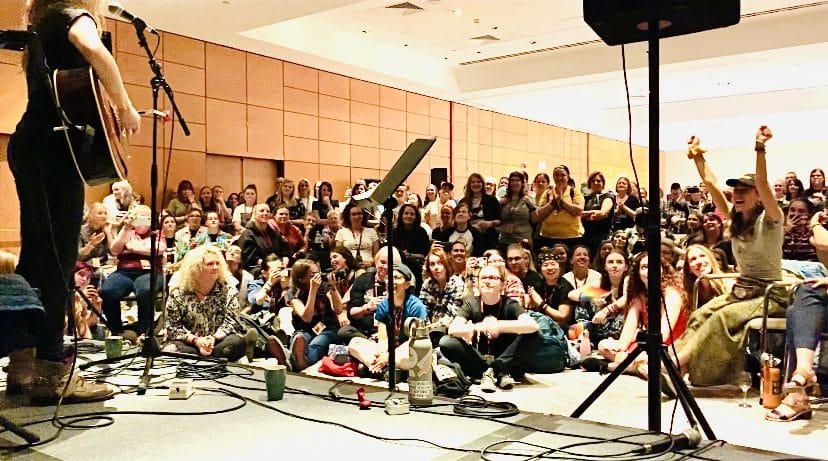 To talk about the EarperCon UK, can you tell us how your weekend went?

EarperCon UK was so sweet with me! Ange, Lisa, the staff members, everyone. The fans were incredible, so inclusive, they were so excited about the show. The organization asked me if I could join the actors during the meet and greet around the tables to talk to the fans. I was so insecure, and feeling so vulnerable, I thought no one would talk to me or would know me… But they were so sweet and kind and curious, it was so good to meet them. They spread kindness and trust. It’s such a safe place. 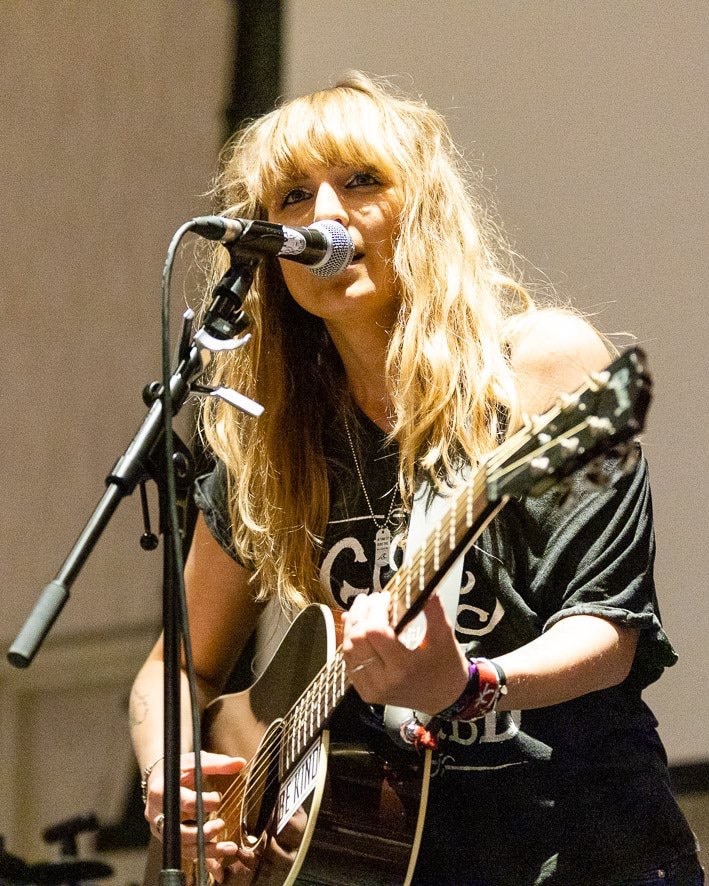 Can you describe your feelings before, during and after the concert?

Oh god I was so nervous. Happy but nervous. So scared, I wanted to do good. And… finally, it was one of the most beautiful shows of my life. The crowd was incredible, on fire! They were dancing and singing! When I think about it I’m immediately emotional. I feel so grateful. And they were so kind with my original songs, I was so nervous about it, they gave me so much love.

During the autograph session (that Emy did the day after the concert, ed.), they told me how much they loved the show, my heart was full of love and light.

Except Dom, Wynonna’s cast wasn’t there but on Sunday, Kat came and hugged me telling me that she wanted to come but she had to sleep, she was exhausted. And Mel, same, she told me that Dom keeps talking about me, she absolutely wants to see my show, let’s trust the universe, I’m sure we will find a way!

To go back to the presence of Dominique Provost-Chalkley at your concert, how did you feel to have her in front of you during your show?

Yaaayy Dom was there!! I knew she would come; she was super excited about it! The fans didn’t know about it, so it was this icing on the cake for them! It was extremely reassuring for me to have her in front of me, I could feel her grounded energy. She was very emotional and supportive and kind. She already knew my original songs, she sang all along, it was so cute! She was with me 15 minutes before the show to give me her energy and relax me. She is an incredible human being, I’m so grateful the universe brought us together.

How were you welcomed by the fans of Wynonna Earp during the convention?

They were so sweet and kind. It was magical. I’ve never seen such a sweet fandom, supportive and inclusive, such a safe place. Lots of fans gave me hugs, telling me how important my musical challenge was for them. During the autograph session, it was incredible, so many hugs, and photos and beautiful connections. A fan told me « I love what you’re doing because we can see that you’re doing it with your heart », I will never forget those words.  Dom was there too, she wanted to live this magical moment with me. 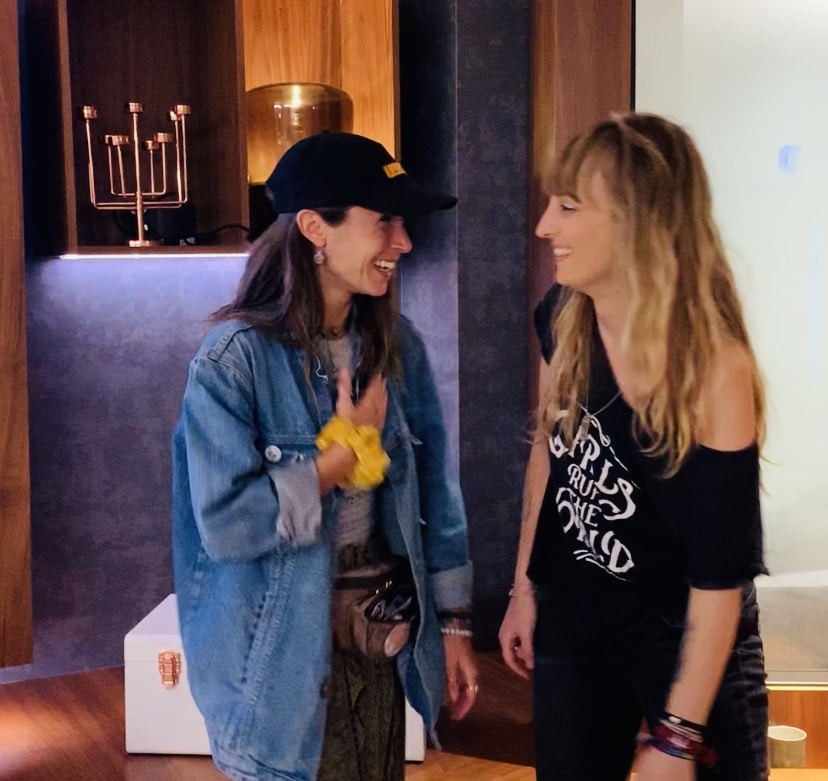 Do you have an anecdote to tell us about the weekend?

Hum…an anecdote… 5 minutes before the show, in the green room, Dom tried to teach us (both me and my bassist Flo) her iconic choreography from the cheerleading scene in season 2, and I have a video of it (laugh) it was hilarious !

You released your album at the same time as the event with this particular title Start The Wave in reference to the movement created by Dominique. How did you create this title?

The album came out 2 days later yes, including the « Start the wave » track. I played it for the first time in London actually. A few months ago I found out about this incredible movement, all about positive change for the planet, kindness, human beings, etc. I was sooo inspired by this, by her and I decided to write a positive song. Dom was profoundly touched by it, we talked a lot about this song and I decided that I didn’t want to make money with it, so all the rights will be donated to ‘Start the wave’ to help make positive change. Earpers were so sweet, singing and dancing, and Dom was crying during the whole song, it was extremely emotional. 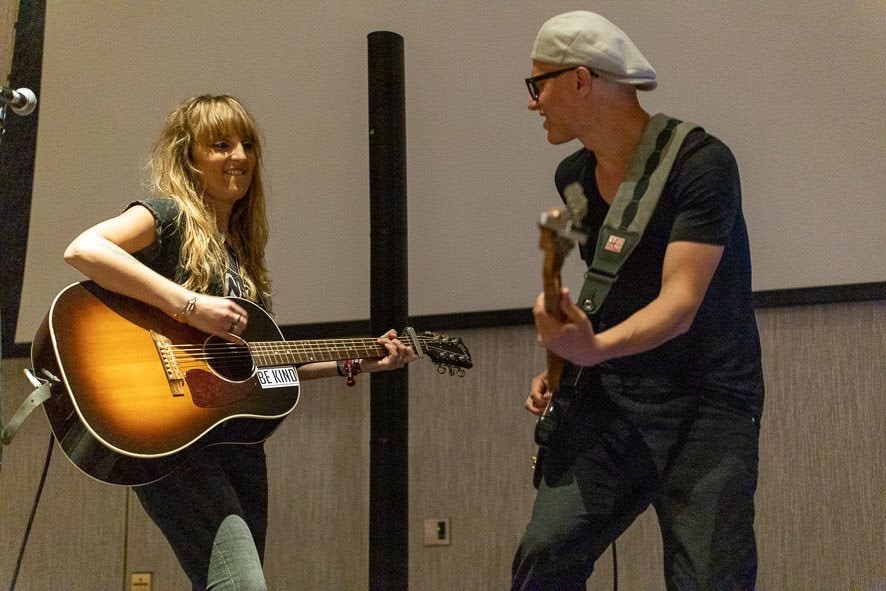 Did she give her opinion during the creation of the title?

I sent the song to her when it was done, she was extremely moved. And during the show she was singing, what could I ask for more?

Do you intend to work in the future together? Maybe on a musical project?

Yes, we would love to, we talk about it a lot, we just have to find the right moment. We know that it will happen, let’s trust the universe.

Dominique is coming back in Paris for the For the Love of Fandoms convention in November. Can we expect a concert from you during the event? Maybe with a participation from Dominique?

For a concert I’m not the one in charge, it’s on Empire conventions! I saw on Twitter lots of fans are asking for it, it’s so sweet. And for Dom participation haha we will see !

Finally, can you tell us a bit about your future musical projects? Other conventions? Dates in France maybe?

Oh yes thank you for asking! Yes my album came out, so a lot of work!
I will be on tour next year with Lorie Pester in France. And regarding Wynonna Earp, yes, that’s official I will perform in California at the Earp division expo, this is crazy. I have so many more but I can’t talk about it for now, but pray the universe for me!
Thank you so much for this interview, it was so much fun to talk about this incredible adventure! Thank you Roster Con !

Space Walkers 5: Bob Morley and Jarod Joseph are the first guests of the The 100 Convention

The Boys - Amazon Prime VideoWhile Jared Padalecki will remain on the…

Conventions TV Show
The 100: Lola Flanery will visit Paris in 2021 for the Space Walkers 6