Jamie Chung : “I would love to do a roadtrip movie with Jennifer Morrison” 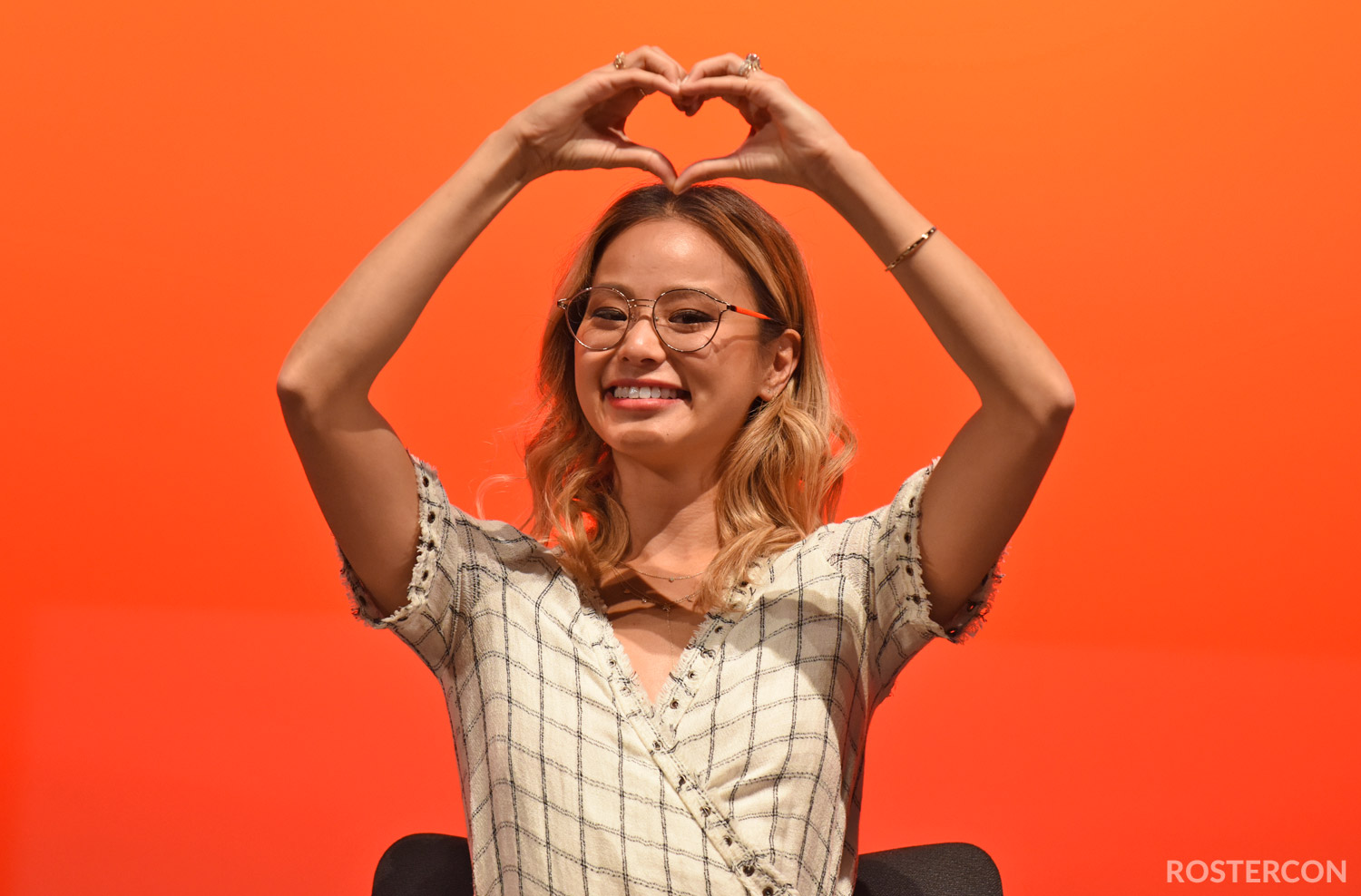 She plays the role of Mulan in the Once Upon A Time TV show and was present in Paris in May for the Fairy Tales V convention organized by Xivents and Highvents. We were able to talk to her a few minutes about conventions, her weekend schedule and her projects. Let us tell you about our meeting with Jamie Chung. Let’s go !

It was about noon when we went to a big room in the basement of the Palais des Congrès in Versailles. Comfortably seated in comfortable armchairs, we had to wait for Jamie Chung only a few minutes before she came in, smiling. She greets us in French “Bonjour!”. Jumping on the opportunity to do the interview in our native language, we asked her if she spoke French “no”. Too bad. We, then, switch into our Frenchie mode with a shi… hum… an accent to … improve and let’s go!

First traditional question : Is this your first trip in Paris? First convention, yes. First time, no: “I’ve been here 3 times. The first time was after I graduated college. I took a vacation here with my girlfriends but we didn’t have a lot of money so we stayed in hostels in Paris and the first time we tried to go to Versailles we came here and they were on strike so we couldn’t see the palace.“ It’s a good thing that the convention is only a few feet away from the Palace, it has finally allowed Jamie to visit the place as we see from the pictures she posted on her Instagram account.

The day before the convention, she went to the Eiffel Tower to “took some photos with my french photographer who is amazing. We went to the Eiffel Tower when there was no one there. Around 7 am.” And luckily because “as soon as we were done with the photos, Tour busses came up and it was literally flooded with people”. The pictures were posted few days later, and the result is very nice:

But back on topic. What does Mulan’s interpreter in the hit series of ABC think of her first convention? “It’s so lovely. You really get to be face to face with all the fans and that’s really what it’s all about. So far, so great !” Fan of the movie The Goonies and of the TV show Legends, conventions would be something she would have liked to do as a fan, before being famous: “I went to Comic Con, I love to geek out! If there is a movie I would love to see or a show that I love… It’s always awesome to be able to meet the actors, the producers, the directors and listening to their sessions.”

By the way, is there an actor or an actress with whom she would love to work? Ok. Fans of Jennifer Morrisson, you’re going to enjoy the answer. “I worked twice with Jennifer (Morrison). The first time on Knife Fight and then Once Upon A Time. She is so fantastic and also a very great director. I would love to do a roadtrip movie with her. That would be fantastic”. We can only approve and hope that she will be heard!

Known in France for her role in Once Upon A Time, Jamie Chung began her career in a reality TV broadcast on MTV: The Real World. She was part of a group of people filmed living in a big house in the United States. She participated in the “San Diego” edition of the program and then in the “Real World / Road Rules Challenge: The Inferno II” version. It was only after this TV show that she became an actress on television, but also in movies or in advertisements. This double cap has made her very famous on social medias, so we wanted to know a little more about her use of these tools.

Her favorite social network? “Currently it’s between Instagram and Twitter because Twitter is really great for the news. As you know in the United States there is a lot of political instability… (she whispers) I hate Trump… anyway. So it’s a great platform to vocalize your political stands and disapproval and support for each other.“ But she doesn’t forget Instragram: “when I travel, like here in Paris, I just wanna show my fans how beautiful the city is.” In figure, Jamie it’s 1 million followers on Instagram and more than 180,000 on Twitter. Not bad, right… especially since she is the only one to manage her accounts and to read everything the fans tell her: “and I try to answer it”. If the comments are often pleasant sometimes not so much: “There is two things about social medias. It can either be really supportive or there is a lot of bullies. So it can be one or the other. It’s constant battle between good and evil (laugh). It can be really bad or really great.” Messages of encouragement are a real source of motivation ” people know when stuff is going on and the support that I get is quite lovely.” But what about the negative messages ? “You can’t just have all the good. You have to be willing to hear the negative as well. And sometimes it helps. No one is perfect, you learn from your mistakes and it’s really important for me to know how the fans feels.”

For her, it’s a little thanks to Internet and social medias that the conventions are happening and are very popular now : “you kind of get to know people without actually meeting them” And then conventions are happening and “meeting them is a whole new experience and to have that opportunity is priceless. Like it’s my first one, I don’t know how they were then but I feel like it’s quite organized and  a great way to meet the fans.”

Jamie and her work

Between 2012 and 2016, Jamie played the role of Mulan in a dozen episodes of Once Upon A Time but after that, she also did some voice acting. Indeed, she makes the voice of GoGo Tomago in Big Hero 6 and Big Hero 6: The Series. We wanted to know if the preparation was different between a “classic” role and doing voice acting: “You still do the same voice exercise, the same warmups but it’s just more fun because you can try anything. It might may feel stupid for you to do but it works. I think the weirder thing to do is when they ask you to make effort noises, fighting noises. “Now you’re punching”… but what sound to you make when you punch… (laugh) It’s so weird. “Ok now you’re throw out to the wall”, “now you land on the floor” (she is making the noise, ndlr). It’s really fun.“

In October 2017, we will also see her in the role of Blink in the TV show The Gifted: “I did a show called Gotham on Fox which is DC comics property. I did that and the creator Matt Nix and Lauren Shuler Donner, the executive producer said they were making a Marvel show. They ask me to come in for this role and they knew immediately that I was the one. I thought that it was very flattering.” Iconic character of the Marvel univers, Blink or Clarice Ferguson for her real name, was previously played by Fan Bingbing, a Chinese actress “who is great”. In The Gifted Tv show, the prequel to Blink’s X-men version, the character played by Jamie Chung discovers her powers and “tries to understand them.” We can not wait to see the result! Check it out on October 2nd on Fox. Jamie shares the bill with Stephen Moyer (True Blood).

Jamie and her phone

To end our meeting with the actress, we wanted to ask her a few funny questions concerning the use of her phone. Eager to do it, she answered quickly and we laughed a lot despite the little time we had left to chat.

What’s the app you use the most? Ted, Twitter, Snapchat, Instagram. I love Yelp. I love food ! And currently in france, I have my google translate because I want to try !
What’s the most famous person number you have in your phone? I can’t tell you that… (laugh and whisper) Bradley Cooper. He might have changed his number…
What’s the last famous person you texted? (thinking) It was Jennifer Morrison.
What’s the last thing you googled? Bars in my neighborhood
Last picture you took? It was last night with Colin. With the champagne… I’m hurting today… (laugh)
The photo you’re the most ashamed of? I take a lot of food pictures. It’s kind of weird right…

Then we were kindly stopped by Jamie’s very friendly assistant. A little goodbye and then she went into her room to lie down a few minutes and be ready to continue with the autograph sessions, photoshoot or Q & A. What a very nice meeting!

On August 22nd, fans of the DC Comics universe will meet online to be part of the DC Fandome, a virtual event that will showcase DC's series, movies, comics and video games. Let's take a closer look.

A new feature is appearing on Roster Con: you can now share…