Tom Holland was born on June, 1rst 1996 in London, England. He is an actor best known for his role of Spider-Man in many Marvel movies. Beside that, he also played in the award winning movie The Impossible in 2012 or in The Current War in 2017 which got him a BAFTA Rising Star Award. On stage, Tom Holland played the role of Billy Elliot in Billy Elliot the Musical for 2 years in London. 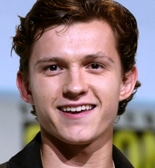 Address for an autograph *

* We don't guarantee that the address indicated is always valid, nor that the actor or actress will respond to your request

How to meet Tom Holland?

Tom Holland is not a regular at conventions. He is usually attending big events like Comic Cons. Check below to know more about his future appearances at meet and greet to be sure not to miss him.

No upcoming events with Tom Holland
All events

Tom Holland is known for...